What is an ‘Assumption of Risk’ and Why Does it Matter?

When you talk about assumptions of risk and personal injury cases, you’re talking about torts. Torts are a type of lawsuit that can arise after someone suffers harm or injuries because of someone else’s negligent or intentional behavior. When someone suffers an injury in this situation, the law allows that person to sue the wrongdoer to recover damages (money) for his or her injuries. A tort lawsuit involves the injured person (the plaintiff), suing the wrongdoer, (the defendant).

In other words, though a plaintiff has to show that the defendant caused the harm that is the subject of the lawsuit, a defendant who wants to use a legal defense has to prove that the defense applies to the case.

For example, let’s say that a friend takes you hiking. During the hike, you injure your ankle. You decide to sue your friend for the medical expenses and lost income that resulted from your injured ankle.

In this case, your friend could probably use an assumption of risk defense to show that because you knew that what you were doing was potentially dangerous, you shouldn’t be able to recover damages from him.

Assumption of Risk and Tort Cases

Assumption of Risk and Your Personal Injury Case

Any time you are discussing legal issues, terminology, or defenses, it’s vital that you talk to an experienced personal injury lawyer in your area. The average person does not have nearly enough experience or training in the law to determine how various potential legal issues might affect their case. The only way to know for certain if an assumption of risk defense, or any other issue, will play a role in your case is to talk to a lawyer as soon as possible.

Damages Resulting From a Dump Truck Wreck Can be Quite High

In a dump truck or gravel hauler accident, more often than not serious injuries are the immediate result. When a 30-50 ton behemoth that’s hauling its weight hits you, even at 30 miles an hour, the damages are often cataclysmic. But the liability may not stop at the driver. Several other parties can be responsible, and thereby, held legally liable for the wreck. This includes the trucker, the company he or she works for, the construction company that the hauler works for, the job-site boss who sets the burdensome schedule for hauling the many loads a day, possibly a defective part on the truck itself, or the company that is responsible for maintaining the rig. So the first thing you must do is find out is whose fault it is for the truck accident that caused the injuries you suffered and the damage to your vehicle along with any other property. One of the things we must be aware of as we begin searching for liable defendants is the legal notion in Texas law called “respondent superior.” It basically means that employers are directly liable for the wreck their employee causes. So by-definition the employer is just as responsible for the action or inaction of its employee, which means it is their responsibility to pay for your injuries and other legal damages. 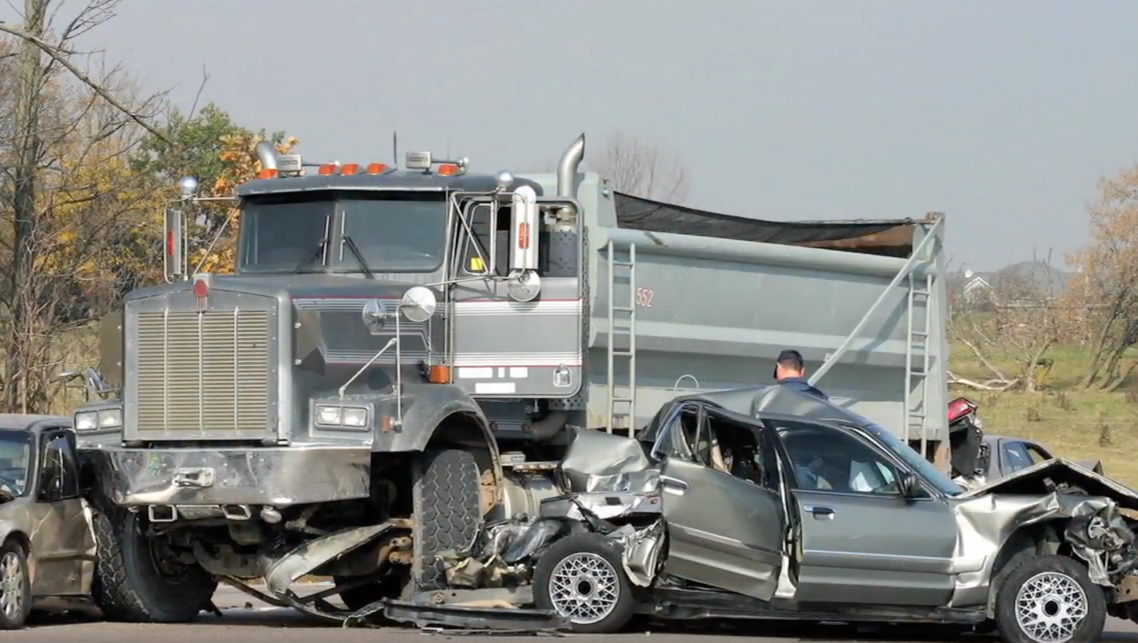 Another relatively new source of liability has emerged over the past few years. States and counties outsource a lot more of their road maintenance and highway construction duties to the private industry than they did just a few short years ago. So if a privately-owned company, in the performance of its road construction or maintenance contracts, creates hazardous road conditions that cause a dump truck or gravel hauling 18-wheeler to hit you, these companies may also be held liable for a portion, or maybe all, of the liability arising from the accident. And all private companies retained by the state of Texas or any of its counties for any outsourced engagement must, by law, a document that they are either properly insured, or provide a very large liability bond that is backed by their cash-on-hand.

To win your claim among a surplus of potential defendants, you need an experienced dump truck/gravel hauling accident lawyer who can investigate the scene of an accident to discover who is liable, and then wade through a great deal of paperwork to determine the best possible targets for your accident-related compensation. Local or state law enforcement agencies will investigate these types of accidents. But right now, in the immediate wake of such a wreck, that’s of little help to you because many times those investigations only reveal the primary responsible parties such as the drivers or the company that owns the rig.

Rarely do they drill-down to identify other contributors to such wrecks that reveal all liable parties. Experienced accident lawyers conduct these stringent investigations and know how to determine the degree of each responsible party in every big rig accident. Occasionally our investigations reveal additional criminal facts of the accident that law officials miss. When we identify those who initially escaped detection, we pass them along to law enforcement for further criminal activity.

After your dump truck accident, your attorney must determine whose negligence caused the wreck, if someone else contributed to it. A mechanical part might have failed. Or vital service was not performed, thereby rendering it unsafe to be on the road and causing the driver to lose control of a large gravel hauler. And sometimes route planners are negligent in sending the truck down a road on which it doesn’t belong.

Rare is the time when finding fault in an 18-wheeler accident is as simple as 1, 2, 3. But an experienced Texas dump truck wreck law firm gets to the bottom of the accident and identifies every liable party who is responsible for your injuries, pain, suffering, lost income, and other damages arising from such a tragic wreck; including wrongful death damages.

Our Law Firm has decades of experience handling personal injury litigation in dump truck and gravel hauler accident cases. If you or a loved one has been seriously injured by one of these road monsters, our expertise significantly increases your odds to receive the fairest compensation possible for the injuries and pain you have suffered. We’ve helped deliver millions of dollars to hundreds of accident victims in Texas. So if you or a loved one has been involved in a trucking accident anywhere in Texas, our experienced accident lawyers can win the best compensation possible for you.

Call us today at 1(800) 862-1260 (toll-free) for a free consultation to begin your road to total recovery so you and your family can resume your life.

Accidents can lead to serious traumas and consulting a health care provider will allow you to know the degree of injury. It’s always more advisable to avert an accident if it’s in any respect possible. When you have been through an auto accident, whether your injuries are minor or catastrophic, you’re likely attempting to start the healing procedure and dealing with quite a few practical issues right now. How you manage a car crash is more important than you might imagine. Automobile accidents claim several lives each calendar year throughout the world. For those who have recently been engaged in an auto accident, then you’re probably wrestling with numerous questions.

Pick a PI lawyer dependent on the particular kind of injuries you have suffered. Other people today are left permanently disabled by an injury sustained during a crash and might be unable to go back to work in any way. When you have any injuries from an auto accident, among the most critical things to do is schedule a visit with your physician whenever possible.

The attorney will access your case and permit you to know what he feels that you’re entitled to. An auto accident lawyer intends to get the utmost possible compensation because of his client. Luckily there are dedicated automobile crash lawyers and personal injury attorneys to safeguard our interests.

Any attorney might make a telephone call to attempt to negotiate a settlement. An auto incident attorney can provide you vital information regarding all elements of a crash you’ve been involved in, from the legal perspective. He will help you to get the exact quantum of compensation for your injuries, which is as per the law. Thus, it is crucial to get hold of a seasoned vehicle collision lawyer who can assist you.

You shouldn’t be speaking about the way the collision occurred or who’s at fault with different drivers. Accidents can turn your lifestyle upside down. Even seemingly minor accidents can cause whiplash injuries. Speak to the very best lawyer you may find to aid you with any recent accident.

The attorney moreover should be very acquainted with insurance difficulties and strategies to track down all assets that may be applied to a settlement or award. Furthermore, he will need to have sufficient experience to be able to determine the value of the claim.

All About Car Accident Law Firms
Your car crash attorney is able to also assist you in finding medical treatment should you not own a medical provider or don’t have medical insurance. He, however, can be a wonderful source of information and support throughout the entire healing and litigation process. An auto accident lawyer isn’t going to charge you fees until you get payment for your case. Nevertheless, immediately after an auto accident and after all your physical injuries are treated, you should talk to an auto accident attorney. Only a specialized vehicle collision attorney is able to truly help you when you’re involved with a more complicated case also.

This Blog was posted by No.1 Lawyer – Carabin Shaw Attorneys At Law in El Paso